When we think about a set-top box, then the first device that should come to our mind is the Apple TV. This tiny device can stream audio and video contents to an output device using the internet.

The projector is one of the most used output devices nowadays for its versatility, ease of setup, and more extensive screen compatibility. You can connect this device with Apple TV to take your viewing experience to the next level.

If you are looking for a complete guide to connecting Apple Tv to a projector, then you are at the right place. Here we will discuss this in detail. So let’s go and find the solutions without any gossip.

What is Apple TV?

Apple TV is not what it sounds like. It’s not a television; rather, it’s a media player and microconsole developed by Apple Inc. It’s like Roku, Chromecast, and other streaming devices.

Apple TV is a tiny set-top box that allows the TV and other output devices to display contents from the internet. It is also used to stream music, play games, watch podcasts, and many more. The only method allowed to control this device is remote.

The prime function of the Apple TV is to receive audio and video content from the internet and stream them in an output display device. To stream content, we need to connect Apple TV to an output device like a projector, television, monitor, etc.

To use Apple TV to stream video on a projector, we need to connect them. We can easily connect two devices using various ports available on both devices. Let’s identify all available ports on all generation Apple TVs:

So only an HDMI port is available in the latest model of Apple TV to connect with a projector.

Now let’s talk about connectivity options on a projector. We need to identify them to know the compatibility of ports on both devices. Most of the projectors have the  following connectivity ports available:

How to Connect an HDMI Available Projector with an Apple TV?

Things to do when HDMI ports on a Projector are in use?

Most of the projectors have limited HDMI ports. Sometimes we may use up the available HDMI port either to Connect with a gaming console or other streaming device. In that case, you might wonder how to connect Apple TV to a projector?

Don’t worry because you can easily collect or buy devices like an  HDMI switch. The HDMI switch is an HDMI splitter, with one end with a male HDMI connector and the other end-has three HDMI female connectors. You can insert the male part of the HDMI switch to the projector’s HDMI port to extend the HDMI ports and connect other devices using these female HDMI ports.

How to Connect a Projector with an Apple TV Without HDMI?

Though the latest projectors have HDMI ports, old projectors might have no HDMI ports available. You may think you can’t connect to the Apple TV if your projector doesn’t have HDMI. Don’t worry at all. You can join without an HDMI port.

Things to Consider Before Connecting Without HDMI

The available converters you can buy:

Connecting Apple TV to a  Projector Without HDMI

Always choose a projector with HDMI available. Because connecting Apple TV with a projector using HDMI is the easiest way.

If your projector has multiple connectivity ports like VGA, HDMI, or DVI-D, then you should choose an HDMI port to make the connection. HDMI is the most used HD signal that transfers both audio and video signals at the same time. It is faster and more preferable as recent devices use HDMI ports than VGA and DVI-D ports. As HDMI can transmit audio and video HD signals together, we don’t need to use separate audio and video cables.

You can easily connect your Apple TV with a projector. Just identify ports before making a connection and ensure that available ports on both devices are compatible.

If ports on both devices are not compatible then use suitable adapters or converter cables to make connections.

We have discussed connecting to Apple TV with a projector and its available options. I hope this article helps you with the complications of connecting an Apple TV to a projector. 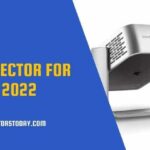 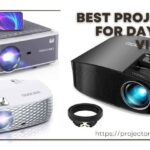 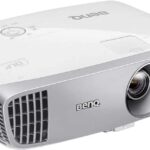 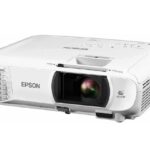 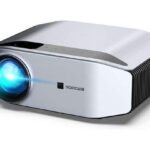